What exactly is the pancreas?

The pancreas is a vital organ located on the right side of the abdomen, next to the stomach. It generates enzymes to aid in food digestion as well as hormones such as insulin, which regulates blood sugar and glucose metabolism.

RELATED: Cat Down Syndrome - Can Cats Have It?

What exactly is pancreatitis in cats?

Pancreatitis can occur in cats on rare occasions. When it does, it is frequently accompanied by liver and intestine inflammation. This multi-organ inflammatory process is known as "triaditis" in some circles. This happens because the inflammation caused by acute pancreatitis allows digestive enzymes to leak into the abdominal cavity. Pancreatitis has no age, gender, or breed predisposition. Acute pancreatitis can be mild and edematous, or it can be severe and hemorrhagic.

As a result, the pancreas begins to digest itself, and the clinical signs begin. Pancreatitis clinical signs are frequently variable, and the severity of the disease is determined by the extent of organ involvement.

Pancreatitis appears to occur spontaneously in cats, with no identifiable trigger or inciting cause. Pancreatitis can also be caused by underlying conditions such as inflammatory bowel disease or diabetes mellitus.

RELATED: How Often Should I Take My Cat to the Vet?

What symptoms indicate pancreatitis in cats? Some cats may have only one or two of these symptoms. Because pancreatitis often happens with other diseases, you may notice symptoms such as jaundice (with liver and biliary disease), increased drinking, and weight loss (with diabetes).

How is pancreatitis diagnosed in cats?

RELATED: How Long Do Cats Live? Can I Prolong My Cat's Life?

What is the treatment for pancreatitis?

Early diagnosis and prompt medical treatment are critical for successful pancreatitis management. Treatment for mild, edematous pancreatitis is supportive, consisting of "resting" the pancreas and allowing the body to heal itself. The only way to "turn off" the pancreas is to withhold all fluids and food. The pancreas will not be required to secrete any digestive enzymes that may inadvertently harm the pancreas or surrounding organs. Intravenous fluids will be administered to maintain normal fluid and electrolyte balance, and analgesics will alleviate the severe pain. Many cases will also necessitate the use of anti-inflammatory medications or other medications to control vomiting or diarrhea. If a concurrent infection is suspected, antibiotics will be administered.

Most pancreatitis cats are hospitalized for two to four days while intravenous fluids and medications are given and food is gradually reintroduced. If the cat has severe hemorrhagic pancreatitis or is showing signs of systemic shock, intensive care is required, including aggressive intravenous fluids and medications to counteract shock. If your veterinarian suspects that the underlying cause is inflammatory bowel disease, your cat may need to be switched to a special diet for cats with food intolerance. Furthermore, if your cat is found to have diabetes mellitus at the same time, additional treatment may be required.

RELATED: How Long Does a Cat Stay In Heat?

What is the prognosis for a pancreatitis-diagnosed cat?

The prognosis is determined by the severity of the disease at the time of diagnosis as well as the response to initial therapy. Cats who exhibit shock and depression mostly get a bleak prognosis. With early intervention and aggressive treatment, most mild forms of acute pancreatitis have a good prognosis. 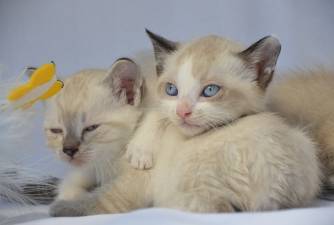